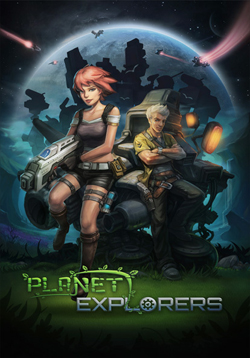 Planet Explorers is an open world voxel based sandbox adventure rpg game set on a distant planet. The game uses a new OpenCL system based on the Unity 3D engine to allow players to change the terrain in anyway, create new objects in any form, and do it anywhere.

In Planet Explorers, it is the year 2287, one of the first colony ships sent out by Earth arrives at the planet Maria, in the Epsilon Indi Star System. During its landing sequence, something appears in front of the massive ship that causes it to lose control and crash into the planet. Some of the colonists survive in lifeboats, but what they find is an unforgiving land filled with creatures ready to outlast the visitors from Earth. Now the survivors must explore, gather, build, create, fight, and ultimately, conquer the land.

The gameplay will be in 3rd and 1st person perspectives. Players will be able to customize their character, combine and create weapons, vehicles, and buildings. At the same time, players will have to defeat multitudes of enemies of varying intelligence and defend the remnants of the colonists. There will also be a mission system that features NPCs giving the player goals to achieve to advance the storyline. The game will feature a single player story line as well as random single and multiplayer adventure maps. Multiplayer will feature prominently in Planet Explorers.

Q: This is a voxel game?
A: Yep, believe it or not, voxel does not mean box shaped. Remember Outcast from the late 90s? That was also voxel based. The Cryengine uses voxels to a certain extent as well. The voxel algorithms we’re using take more power to calculate than the box form voxels, that’s the reason there aren’t too many of this type around, yet.

Q: What are you trying to achieve with this game?
A: In this game, we’re aiming for total freedom for the player (or as much as the hardware limitations at the time of completion allows), which means, the player can build almost anything, weapons, vehicles, etc. On top of that, we will have a story driven adventure to give the player goals to use their creativity to achieve. And if we make money in the process, that’s cool too.

Q: So what if I just goof off and build stuff in game?
A: That’s fine with us, the player doesn’t have to follow the storyline at all.

Q: Is this going to have procedurally generated landscapes?
A: No. We’ll have a 9X17km continent. Everything will be set so that there will be landmarks. The multiplayer portions of the game will feature procedural landscapes though.

Q: What platform is this form?
A: PC, Mac, and Linux. We might consider the Xbox One and Playstation 4 if the game is successful on the PC.

Q: This sounds like a lot of stuff, can my computer even run it?
A: As long as you have a dual core processor and a graphics card that has DX10.1 or above, you should be able to run it (that’s what OpenCL requires). We would recommend gt240 or equivalent or above and 3GB of ram is going to be required. If you’re having troubles with running the game, please don’t hesitate to post on our boards and we’ll try to figure it out for you (but read the readme file that comes with the game though).

Q: Sounds good, when will this be out?
A: It’s out in alpha form right now! We want to get this game out in final form by sometimes in 2015 (hopefully mid).